Time moves on, seasons change, and it’s seems inevitable that winemakers will come and go. So it is that David Raffaele, formerly part of the winemaking team at Maurice Car'rie and Van Roekel Vineyard and Wineries, has been selected as the new winemaker at Keyways Winery. I think this is an excellent choice for this winery and I know you’ll enjoy reading about this interesting young winemaker.

Keyways Winery, founded in 1989 by Mr. Carl Key, was one of the original wineries that established Temecula Valley Wine Country. Today, under the ownership of Terri Pebley Delhamer, Keyways has the unique distinction of being the only woman owned and managed winery in the South Coast region.

David's passion for wine began while living and working in Italy as a Navy photojournalist. During his travels throughout Europe during a six-year sojourn, he was unwittingly exposed to a number of handcrafted, limited-production wines rarely available for purchase outside the small village where they were produced. He visited vineyards in the countryside, occasionally met with or interviewed local winegrowers and before long became deeply enamored with Mediterranean living. The yearning for that lifestyle eventually led him to Temecula Valley and, after separating from the service David began his apprenticeship as a winemaker at Maurice Car'rie and Van Roekel Wineries. Under the mentorship of award-winning winemaker Gus Vizgirda, David began learning the skills and discipline required to be a competitive winemaker in Temecula Valley.

Along with hands-on experience he earned formal educations in vineyard management and wine chemistry. After three harvests at Maurice Car'rie, David sought out a winemaking position in the valley and found a home at Keyways Vineyard and Winery. He is particularly excited to be working with and cultivating the grapes grown at Keyway's estate vineyard. He believes these warm-climate Mediterranean varietals; Grenache, Tempranillo, Roussanne and Viognier, have amazing potential for producing premium wines in Southern California. His vision at Keyways is simple: to continue learning the science and art behind great winemaking, to promote Temecula Valley's unique terroir, and develop innovative winemaking programs that will bring Temecula Valley grapes into their highest form of varietal expression, depth and character. 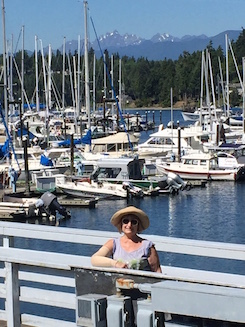 Linda Kissam is a professional travel, food, and wine writer based in the winters out of Southern California condo and on a Grand Banks boat in the summers in Seattle, WA. She is the current president of The International Food Wine and Travel Writers Association. She specializes in easy, breezy destination stories sharing her favorite things about the places she visits. As she sips with the winemaker, dines with the chef, or shops with the gift concierge, she dishes out insights on the fabulous, the famous and the unforgettable. Whether riding the rails in Europe, cruising the San Juan or Gulf Islands, cruising on the Douro River, or being pampered at luxurious spas and resort, she is investigating the local buzz to provide her readers with tips on what to buy and what to try.

Linda loves finding and sharing what makes each place she visits so special. Her time spent as a publicist for a well-known wine region taught her it’s the story behind the product and the experience of the place that makes the trip memorable. She never knows if "the story" will end up being based on finding the perfect latté, ordering Pommes Frites with Parsley Butter in a small French bistro, searching for an Internet café in Sicily, or attending a wine seminar aboard a cruise ship. She never travels without a notebook, camera and a great pair of Brighton flats. She has an addiction to personable people, interesting wines, gourmet coffee, fabulous chocolate and spicy foods. Anyone who knows her will tell you that she loves traveling anywhere, by any means, and is somewhat obsessive about jewelry and a good taco.

Linda is now on the road sipping wine, dipping into eternity pools, piloting narrow boats in England, and concentrating on finding the best experiences for her readers. Using fractured French, Spanglish and a good sense of humor she is on the hunt for the perfect cruise, the best winery, the unbelievable purse, the sexiest pair of shoes, a beautiful bangle or two and the best travel experiences possible – be it local in So-Cal, Washington state or thousands of miles away in any direction. Some people find it a crazy lifestyle; she likes to think of it as amazing opportunities.